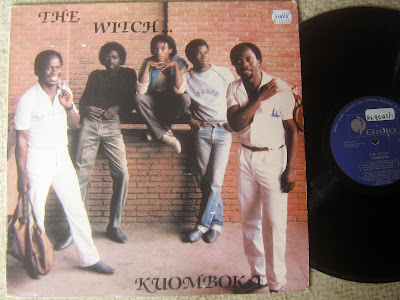 The success of township music shouldn’t be understood as being separate from the rest of Southern Africa. Harari’s cross-border exploits are case in point. Although isolated politically and culturally, many albums from north of the border found an audience here. In the 50s and early 60s, SA labels would send out field units north to Rhodesia and Malawi and Mozambique. Gallo and EMI had branches in Nairobi. As apartheid forces cracked the whip, especially after Sharpeville in 1960 and the declaration of a republic the following year, SA companies stopped recording material from other parts of Africa. Some managed to slip though, thankfully, like the Zambian group The Witch.

Short for 'We Intend To Cause Havoc,' The Witch formed in the early 1970s and put out something like 5 LPs over the next 15 years. As their name suggests, their sound was initially heavily influenced by rock (“Zamrock” was the scene at the time). During the 80’s, they couldn’t escape the charm of synthesizer-driven funk. Their 1984 release Kuomboka, named after a traditional water ceremony, was recorded in Harare and produced by Shaddick Bwalya, the driving forced behind the band. Over ten musicians, most listed as “guests,” contributed on this tight and irresistibly sexed-up album. Tracks like “Erotic Delight,” “Believe me Lover,” “Come Together” and “More Sweat than Sweet” set the groove.