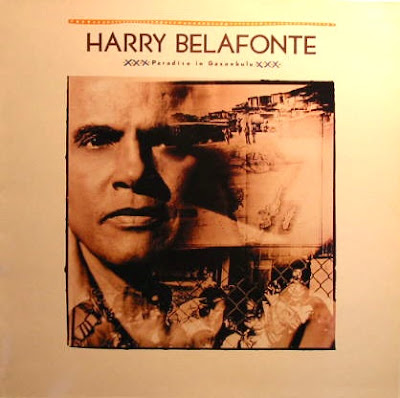 Since introducing the world to Zenzile Miriam Makeba on the Grammy-winning An Evening with Belafonte and Makeba in 1965, “the King of Calypse” had been an outspoken critic of apartheid, and as such a persona non grata in SA. In 1988 he recorded his first new album in fifteen years, a showcase of South African music and politics entitled Paradise in Gazankulu. Unable to enter the country, however, Belafonte had to add his vocals in American studios after the music was first recorded at Powerhouse Studios in Joburg.

American songwriter Jake Holmes shared the credit with various local contributors. Though neither as trendy as McLaren and Descloux’s projects, nor as successful as Graceland, Paradise addressed the political climate of the time with defiance, pride and anger, effectively blending local and western sounds. Standout tracks include “Amandla”, “Sisi wami” and “Monday to Monday,” an upbeat duet between Belafonte and MaBrr.