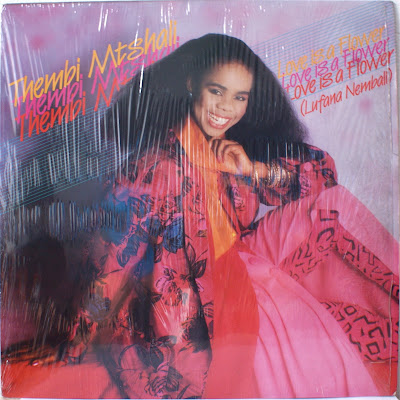 Another Afrosynth favourite, the four tracks on this disc all have something to offer - mostly red-hot synths sound offset by Thembi's seering vocals - and some hilarious talking interludes from an anonymous husky voiced dude on 'I'm Leavin'' and 'Who's Right Who's Wrong', Best track 'I Don't Wanna leave Africa' reflects this well-travelled starlet's mixed feelings for being away from SA at a time when few others had the means to do so.

Our main man Max (Mojapelo 2008: 90-91) elaborates on Miss Thembi Heavygale(!) Mtshali: "Most people know her as an actor of repute both on stage and screen. She has a powerful voice too! As an actor, the KwaMashu-born and Malhabathini-raised star cut her teeth performing with the Nokwe family at the YMCA in Durban ... Later she toured the world with Ipi Tombi, which took her to cities like Lagos, New York and Las Vegas, where it ran for years. Thembi's early music career took her to many parts of the world, including the USA and the Caribbean Islands with stars like Hugh Masekela, Eric Gale and Grover Washington between 1977 and 1979. She was a member of the Freedom Singers raising funds for the struggle." 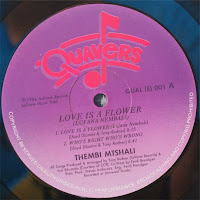 Thembi also worked and toured with the likes of Miriam Makeba, Abdullah Ibrahim and Mbongeni Ngema. In 1984 she fronted the Sipho Gumede-led five-member group, Peace. "After her role in the successful SABC comedy Sgudi'Snaysi, she released an album of the same title in 1987 featuring the blowing skills of hornmen Scorpion Madondo and the late Mandla Masuku. By 1990 she was at Tusk where she released her star-studded album Today Tomorrow featuring Jabu Nkosi, Moses Ngwenya (Soul Brothers), Bakhiti Khumalo, Khaya Mahlangu, Themba Mkhize, Condry Siqubu, Selwyn Shandel and the late Teaspoon Ndelu."(Mojapelo 90-91)

From 1995 to 1998 she toured the UK and the US with the musical Marabi. Today she continues to feature in films and on TV and stage. Now known as Thembi Mtshali-Jones, check out her website here. 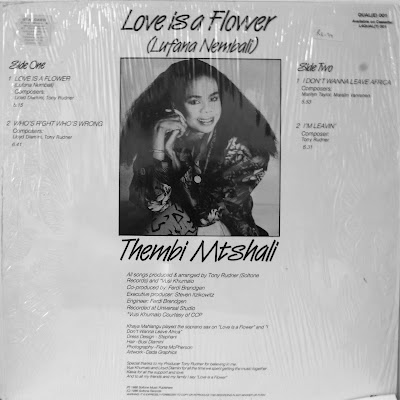